This type of test allows to highlight, during the validation phase and in a short time, the possible critical issues that could compromise performance and reliability during the production process.

One of the main levers available for the product development, in order to accelerate the validation phase, is the specimen thermal shock tests.

This type of test allows to highlight, during the validation phase and in a short time, the possible critical issues that could compromise performance and reliability during the production process. In particular, the test that can be performed with the MIL-STD-883H method 1010.8 subjects the specimen to repeated thermal cycles that produce low/medium frequency mechanical stresses. The DUT (Device Under Test), subjected to this test, will tend to deform in a non-linear way due to the different expansion coefficients of the materials it could be composed of. These, in fact, will suffer expansions/contractions in volume causing strong mechanical tensions, sometimes up to the breakage if the thermal shock suffered by the product is greater than the maximum resistance of the materials.

It is essential that the test protocol and the thermal shock test chamber used are chosen to ensure the effective stress of the products under test. If you do not choose the most suitable equipment, the test performed could not simulate the correct "shock". For example, if the air circulation in the chamber is not adequate for the thermal load induced by the specimen, the following cases can be generated:

It may seem that the chamber follow the thermal profile set (dotted line) but the specimen is not correctly stressed. Actually, the DUT never reaches the temperature peaks it should be subjected to and won't be undergo to thermal shock declared by the standard. 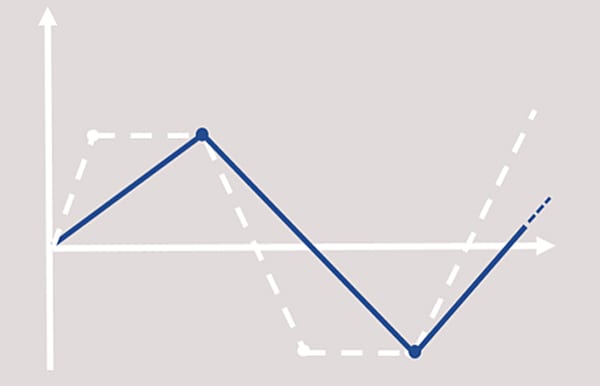 That's why it's important to...

The ACS CST130/2T "spinner" thermal shock test chamber has been developed considering these test requirements and pursuing as a goal the maximization of performance, in terms of solicitation effectiveness, productivity and reliability.

In particular, the product qualification was performed in accordance with the strictest standards set by MIL-ST-883H method 1010.8.

This standard establishes uniform methods, controls and procedures for testing microelectronic devices. Initially used for the qualification of products in the military and aerospace fields where the reliability required is very high, this standard is today used to qualify products in multiple application sectors and performed to test the reliability of a product.

The purpose is therefore to determine in advance the reliability of such devices within the equipment in which they are integrated, in order to investigate quality.

This standard is one of the few in the military sector to define strict criteria of acceptability for the whole sample/test equipment /test plan, establishing the time limits within which the internal temperature of the specimen must reach the minimum temperature target (Tmax - 15 minutes).

This has led to the maximization of some functions with an high impact on performance, such as:

Everything was implemented taking always into account energy consumption, through advanced algorithms that allow intelligent control of resistances.

The performance of ACS CST130/2T "spinner" thermal shock test chamber was measured in relation to different types of electronic components, load configurations and test plans. Following numerous tests to configure the chamber in accordance with the MIL-STD 883H method1010.8, the results obtained were reported in performance tables.
These tables therefore allow the user to carry out a correct evaluation and definition of the test standard. 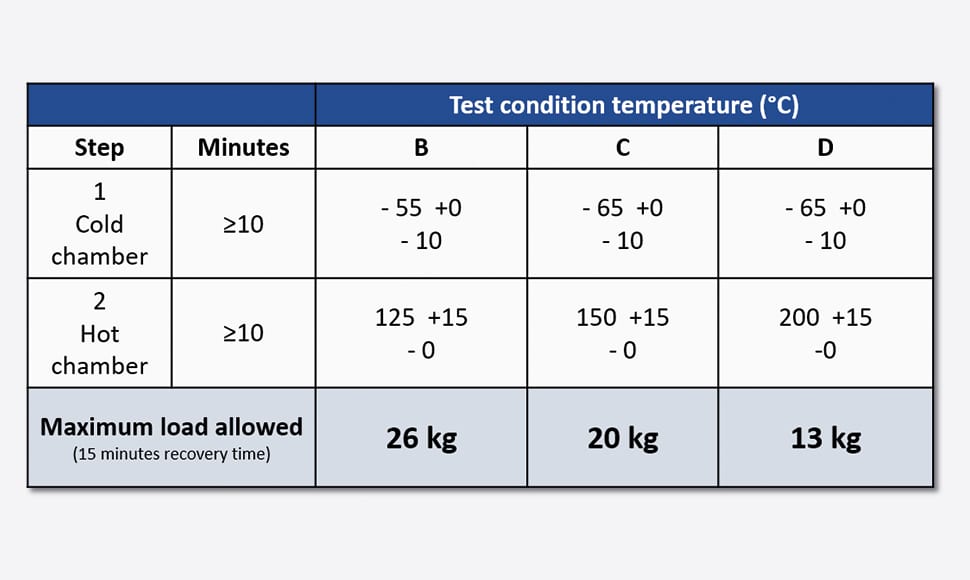 *Step 1 and Step 2 may be interchanged. The load temperature may exceed the + or - zero (0) tolerance during the recovery time. Other tolerances shall not be exceeded.

Angelantoni Test Technologies remains available for more in-depth evaluations on the subject, making available its own experience gained in the field.